Highlights of the 2022 Native Prairie Appreciation Week will include:

4. Much more! Stay tuned for more information about the 2022 Native Prairie Appreciation Week!

An Introduction to Lichens with a Focus on Prairie Species

Celebrate Native Prairie Appreciation Week! Make a poster about “Protecting Prairie” or “Species at Risk” to win a prize! All youth under age 16 from across the prairies are invited to participate! Prizes are available for the Winner and Runner-up in each age category (Under 6, 7-11 and 12-16).

Send your best shot to npawcontest@gmail.com  by June 17th to be entered into the Social Media Photo Contest. The picture with the most votes in each category will be the winner!

Prizes have been generously donated by:

The purpose of the Native Prairie Appreciation Week (NPAW) is to raise awareness and appreciation of native prairie ecosystems and their importance to Saskatchewan's provincial, environmental and agriculture sectors. 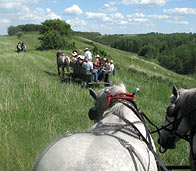 Jointly declared as the third week in June by the Ministry of Agriculture and Ministry of Environment since 1999, NPAW is a week of opportunity for Saskatchewan residents, especially ranchers, naturalists, hunters, educators and resource agency specialists, to recognize and celebrate the diverse value of native prairie. It is the only week in North America devoted to raising awareness of native grasslands.

The week is highlighted by a number of partner events and workshops including the Society for Range Management's workshop and field tour. In the past, this tour was held annually to showcase a different location within Saskatchewan's Prairie Ecozone and has been known to attract more than 100 participants from within our province. The tour will now take place every two years, so keep an eye out for a future SRM NPAW tour!